Astrogun is announcing VAST™ Update 2, the next major free release to come to VAST™ as Apple TV 4K’s first sci-fi anime-styled shooter awarded ‘BEST FPS’ by ATVG and available now under the Launch Special Sale for $9.99 US. The focus of this forthcoming revision was put on overhauling graphics rendering and presentation, while completely rebuilding Episode 1 with all-new environment art modeling, texturing, and level design. The VAST team is aiming to have Update 2 (aka ‘U2’) completed by the end of April, pushed to the tvOS App Store and for free automatically to existing customers by early May 2018. 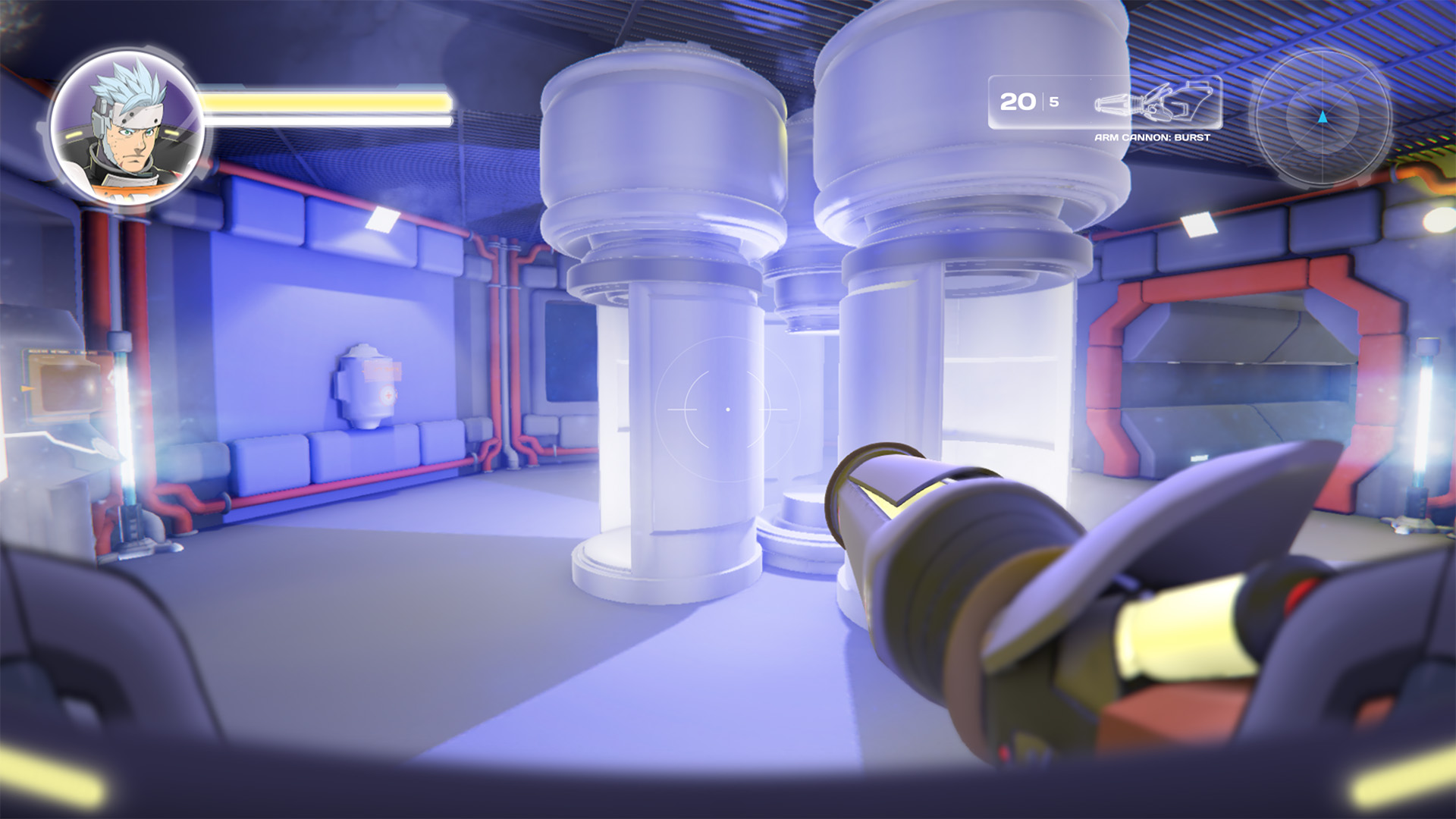 This update will be an all-new play experience with the first Episode. “I’m very excited to be pushing VAST’s quality even higher with our new Update 2,” says Project Lead Xander Davis. “The leap in performance and visual fidelity that VAST is getting is the equivalent to that seen in a generational leap in consoles. It’s only been a few months since soft-launch, and yet you used to have to wait a decade to get this kind of improvement in your favorite game franchise, both as gamers and as a development studio. We are pushing the brand-new Apple TV 4K and its A10X Fusion chip with Apple’s Metal graphics API to the absolute max, reaching parity with PlayStation 4 and Xbox One level visuals.”

This leap forward comes with the full embrace of the Apple TV 4K released last Fall 2017 over the Apple TV 4 from 2015 that used the A8 chip from 2013. While VAST currently does run on ATV4, Astrogun has never officially supported the device, instead always only the ATV4K. The newer console’s A10X Fusion chip is closer to the brand-new iPhone 8 and iPhone X’s A11 chips, the cutting edge of Apple’s entire device SoC family.

From Art Enhancements to Major Overhaul

This past week in the Astrogun Labs, an experiment was completed that proved out internal capabilities and pipelines for taking the environment art of VAST’s episodes to a whole new level, literally. The original build of Episode 1 is being archived for a brand new rebuild that leverages these advancements.

This comes in parallel with upgrading the project to the new Unity 2018.1 (now currently in beta and expected to be released fully by Unity sometime in April), enabling VAST to take advantage of all of its new features, particularly in graphics and performance enhancements.

Xander has been continuing his multi-year training for 3D modeling with Modo to be able to hand-model the game’s environment art there instead of relying on Unity’s now first-party ProBuilder toolset, which the first version of Episode 1 was originally built with. 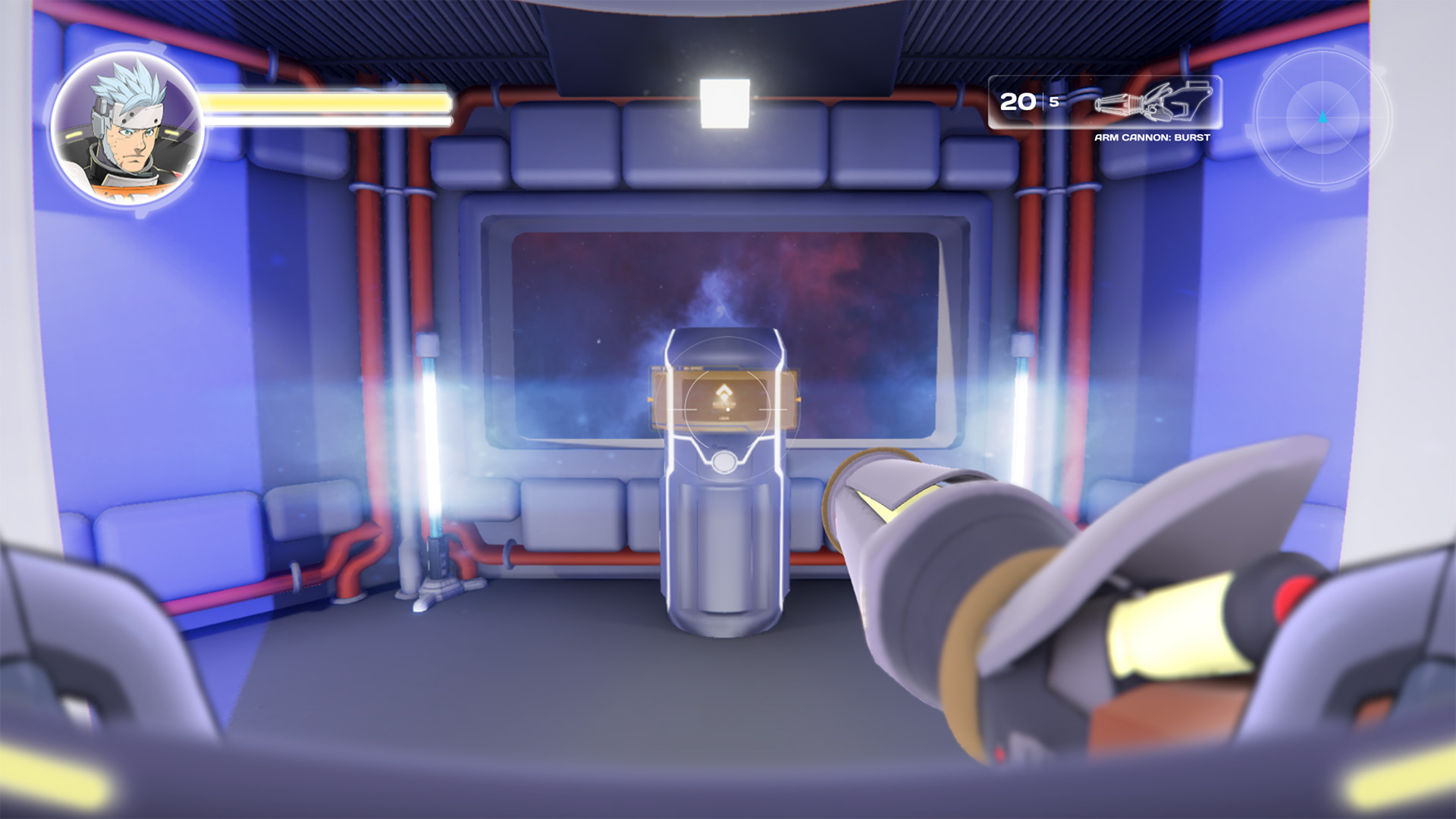 The number of polygons on-screen rendered per frame now have more than quadrupled, adding a lot more detail and shape to the level environments, while simultaneously making sure all models are efficiently crafted as game-ready assets.

Xander says, “The idea is to really lock our quality and art style in Episode 1 with Update 2 before moving forward with Episode 2 and all the rest, because this process will really set the bar for the whole game. This comes now as we really have a handle on the newer Apple TV 4K’s capabilities and major recent game engine advancements.”

Currently, the test rebuild area in the Episode, the Stasis Chambers Room upon which VAST protagonist Enzo awakens from hypersleep aboard the Aces High starship, has been completed with new environment models and UVs for higher-quality lightmapping. 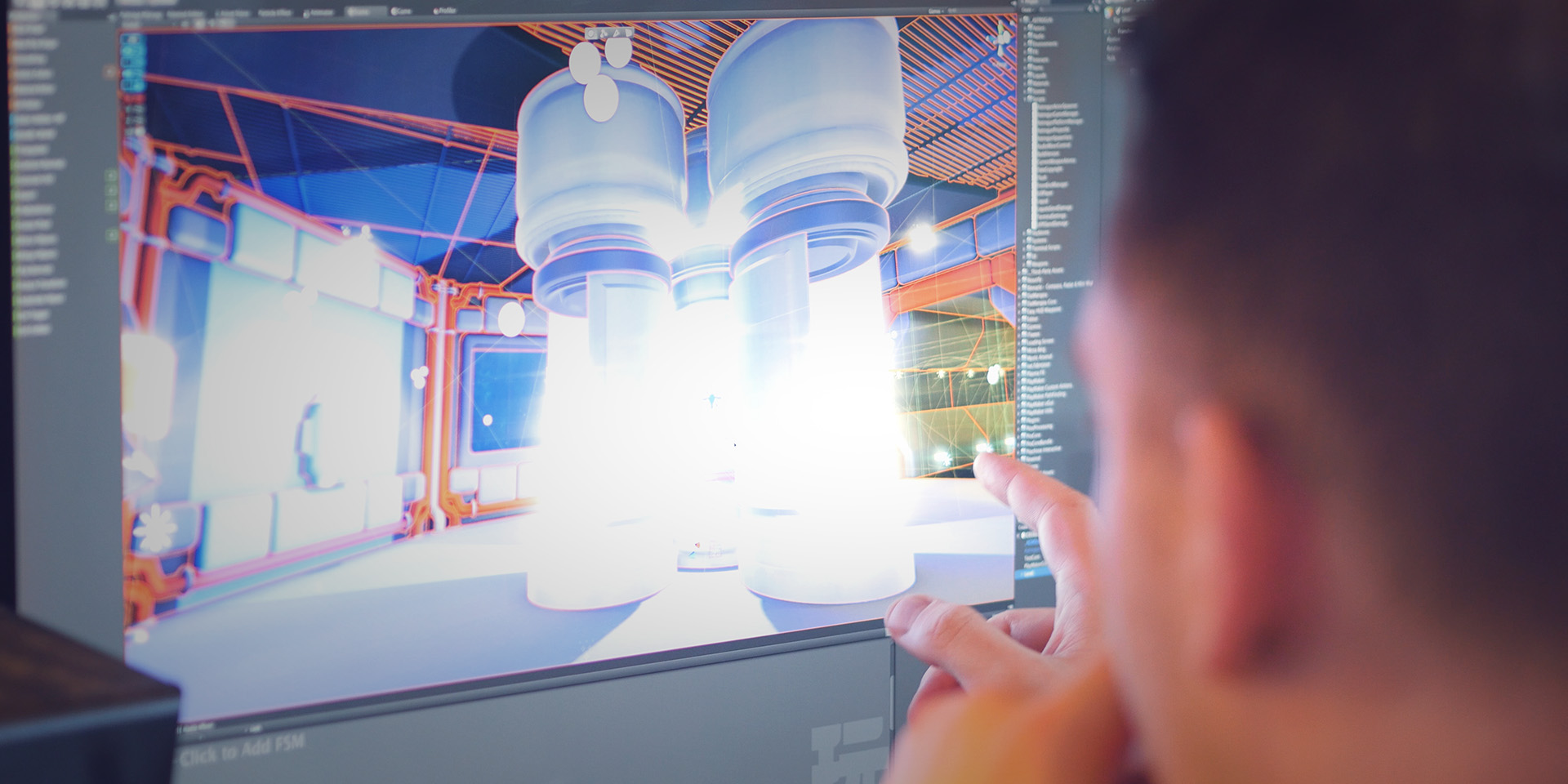 However, texturing work has yet to commence. The next experimental phase at Astrogun Labs is to work with Substance Designer and Painter to create physically-based rendered (PBR) materials with Unity’s Standard Shader in tandem with the new Shader Graph available in Unity 2018.1. These will be applied for the fresh environment models, bringing all level artwork on par with triple-A production.

On this Xander says, “I want to make sure we find the right balance between a fully textured look and the more anime-like art-style we want to lean more into, which is more the voice of VAST. This means everything has rounded corners, is modeled to be a little ‘puffy’, and is finished with soft ambient occlusion in the lightmaps. So surfaces should not be too realistic or detailed. There’s a level of minimalism and yet hyperreality I want to try to achieve that makes the world of VAST seem very fun and welcoming for adventure, yet rich in detail and especially color.”

VAST’s lighting and rendering has also now received dramatic upgrades, with a combination of both baked lighting and global illumination and realtime animated lights for a total lighting quality unlike anything VAST has ever featured yet.

Environments can also now generously feature particle emitters, such as dry ice coming off of the Stasis Chambers and vents in the room, in tandem with realtime lights for a much more immersive ambient environment design. This is all while maintaining a solid max framerate.

The rendering camera is now also packed with advanced industry-leading post-processing effects, such as lens curve, extremely efficient anti-aliasing, color correction stylization, bloom, anamorphic lens flare, vignetting, lens dirt, chromatic aberration, bokeh depth of field on the foreground weapon, and more. Most notably, the addition of motion blur really goes beyond aesthetic enhancements and actually improves the sense of what Japanese game designers call ‘flow’ with the gameplay itself. Flow in environment exploration and action combat is very much proving to be one of VAST’s core strengths during its fast-paced run-and-gun gameplay, and the motion blur effect makes this feel even more silky smooth. 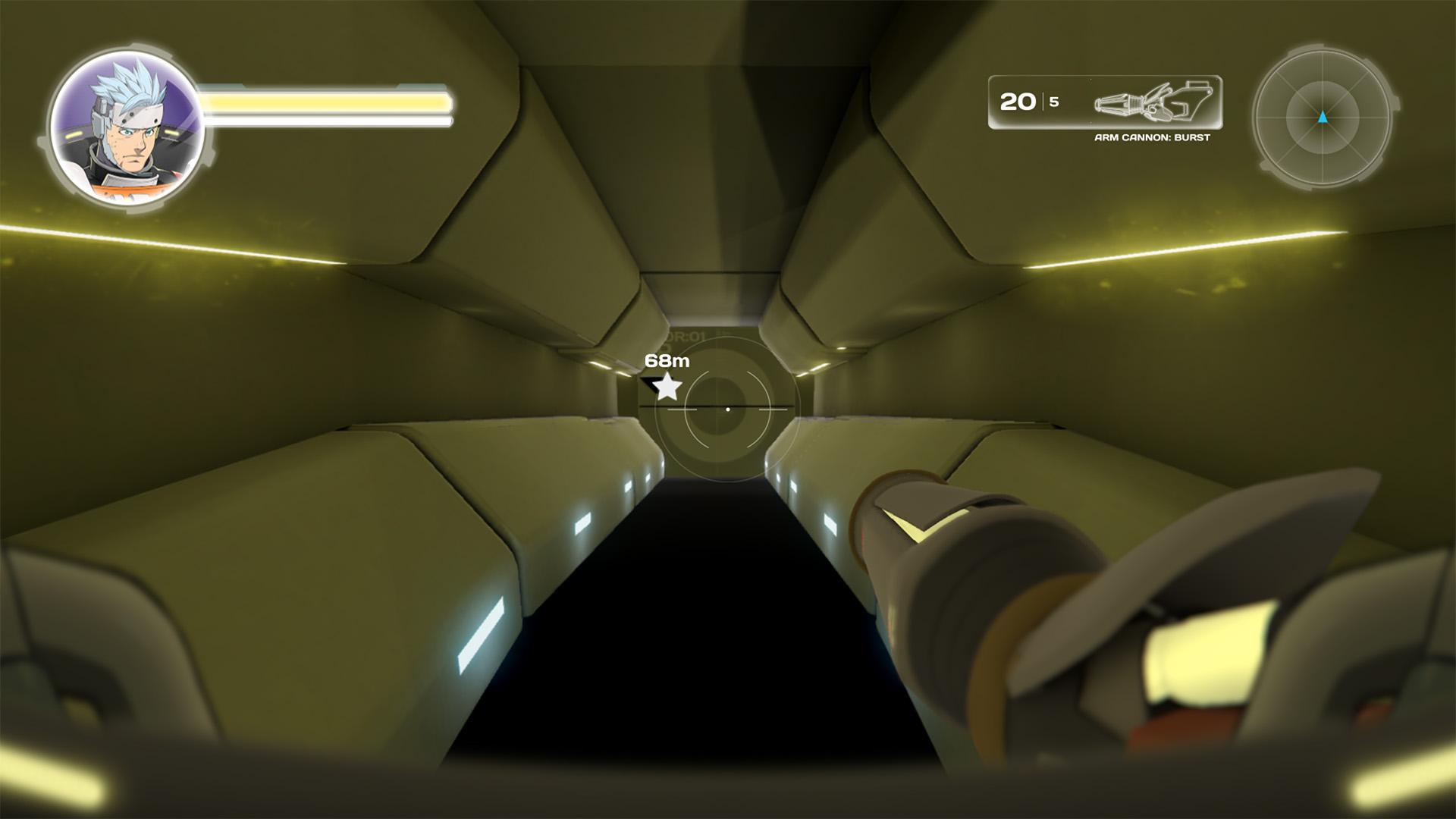 To get this level of presentation solid on Apple TV 4K, which is using mobile chips unlike the two most dominant consoles VAST is pushing it to match, the decision was made to lock resolution to 2K and framerate to 30fps. The result, however, is a rock-solid and butter-smooth 30fps on the little smart TV device, even with a room filled with fast-paced enemy AI, gunfire, and explosions, that doesn’t also melt the ATV motherboard in the process.

Yet this is not the total lock for VAST’s overall presentation. “We are likely moving towards multi-platform in the future with VAST,” Xander said. “I conducted a number of experiments during U2’s early phases across multiple devices and platforms, and even put in some features to get us more ready for eventually going multi-plat soon in multiple ways. It may end up being an amalgam between production bandwidth and business considerations that determine when exactly we will make that leap. I can, however, indeed confirm that on one of the tested platforms, we have easily achieved a solid 60 frames per second at 4K, no problem, on exactly three year-old mainstream hardware. This was always part of the original plan under the Astrogun Starbase standard metaconsole live-spec, and it’s very exciting to see the metaconsole theory working in application.” 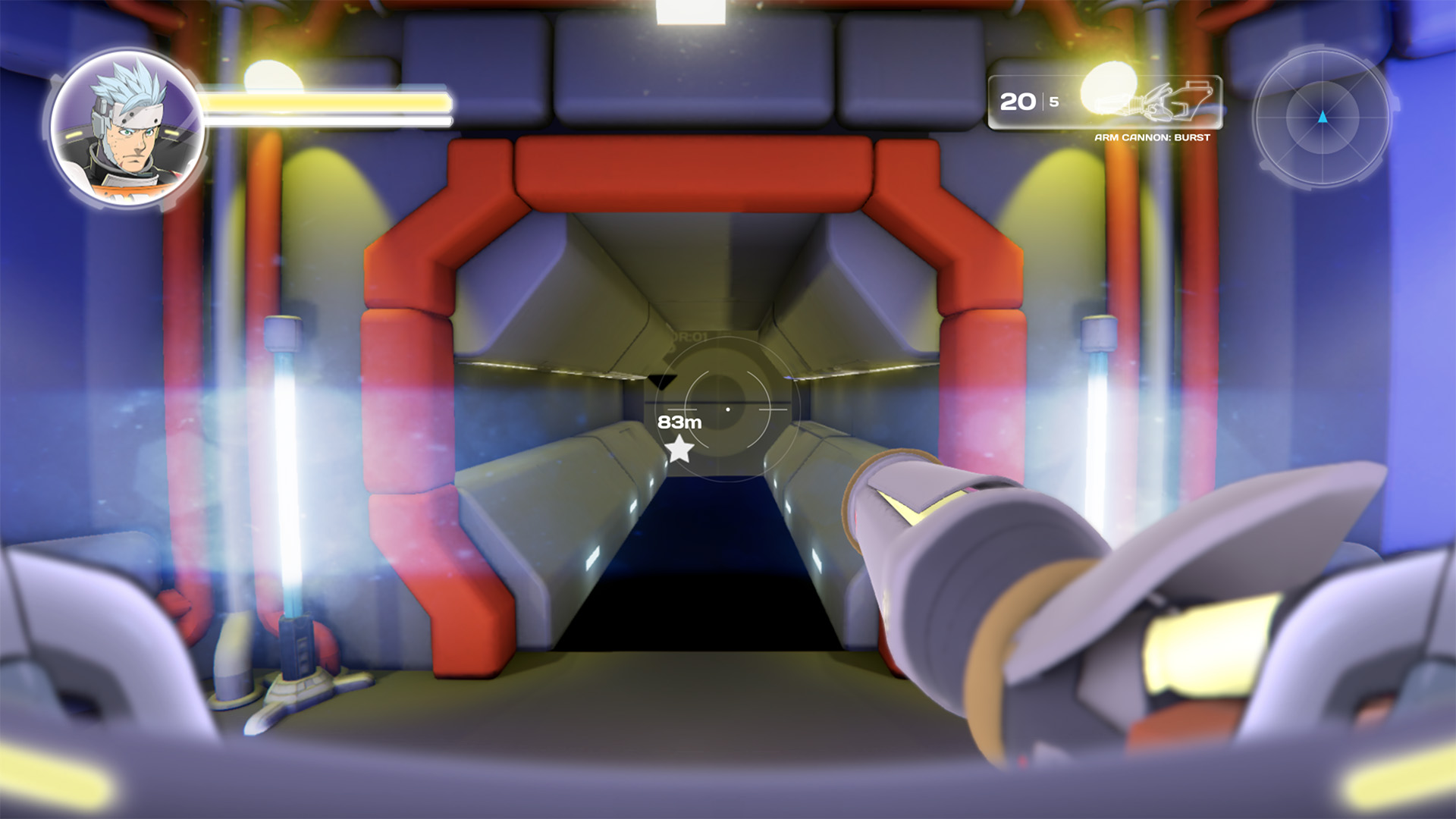 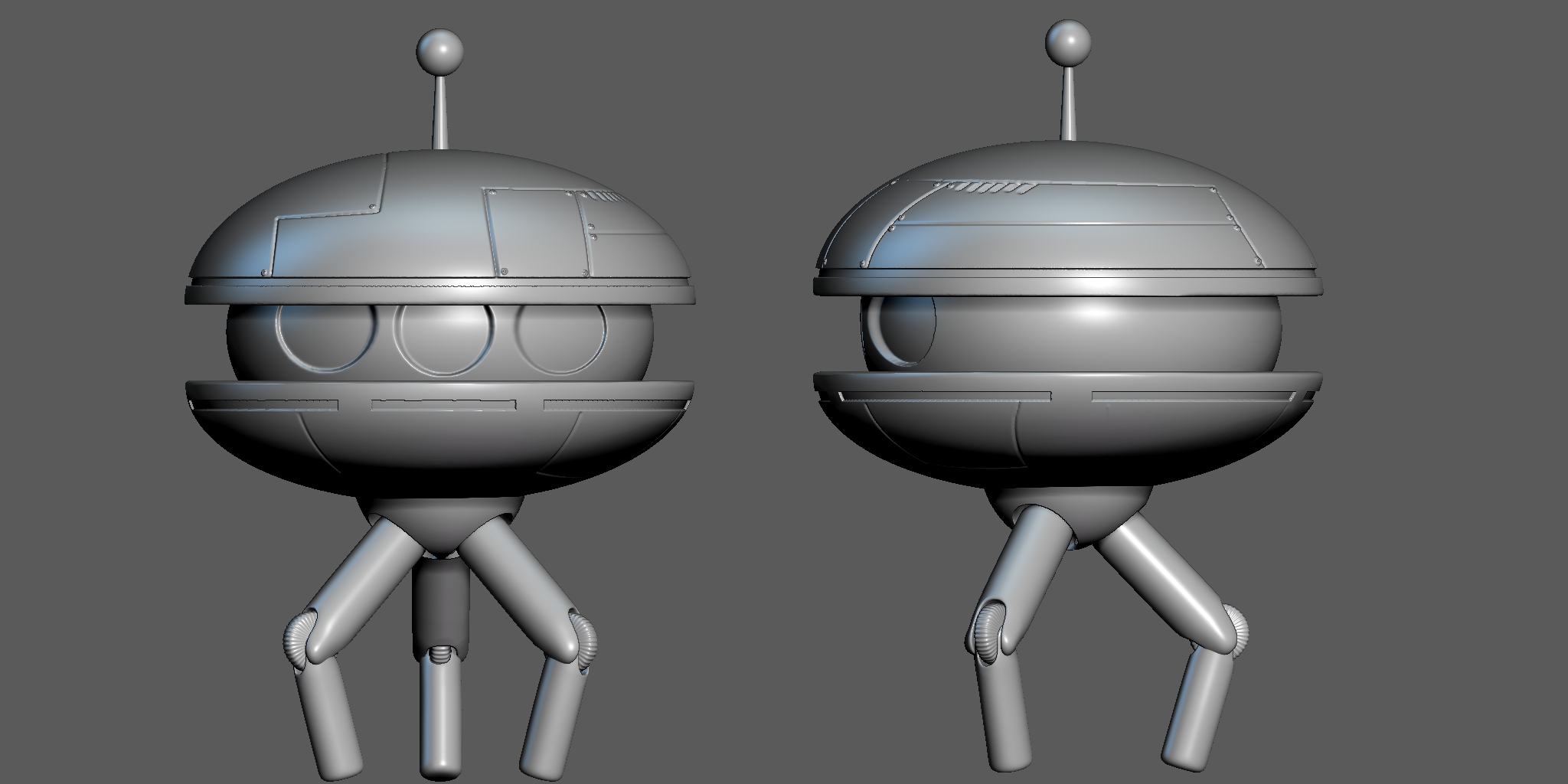   Across the world in India, team member and Character Modeler Rohan Singh is working on the character model for a new NPC / enemy called HERBY (Helper Robot Buddy), which is otherwise known on a malfunctioning bad day as a ‘Bombbot’. This character was first seen in Bombcrash (LD18) that Xander originally made eight years ago in 2010 and is now part of the Astrogun Universe™. This is after Character Artist Jennyson Rosero completed the new illustration based on Xander’s original sprite art design. 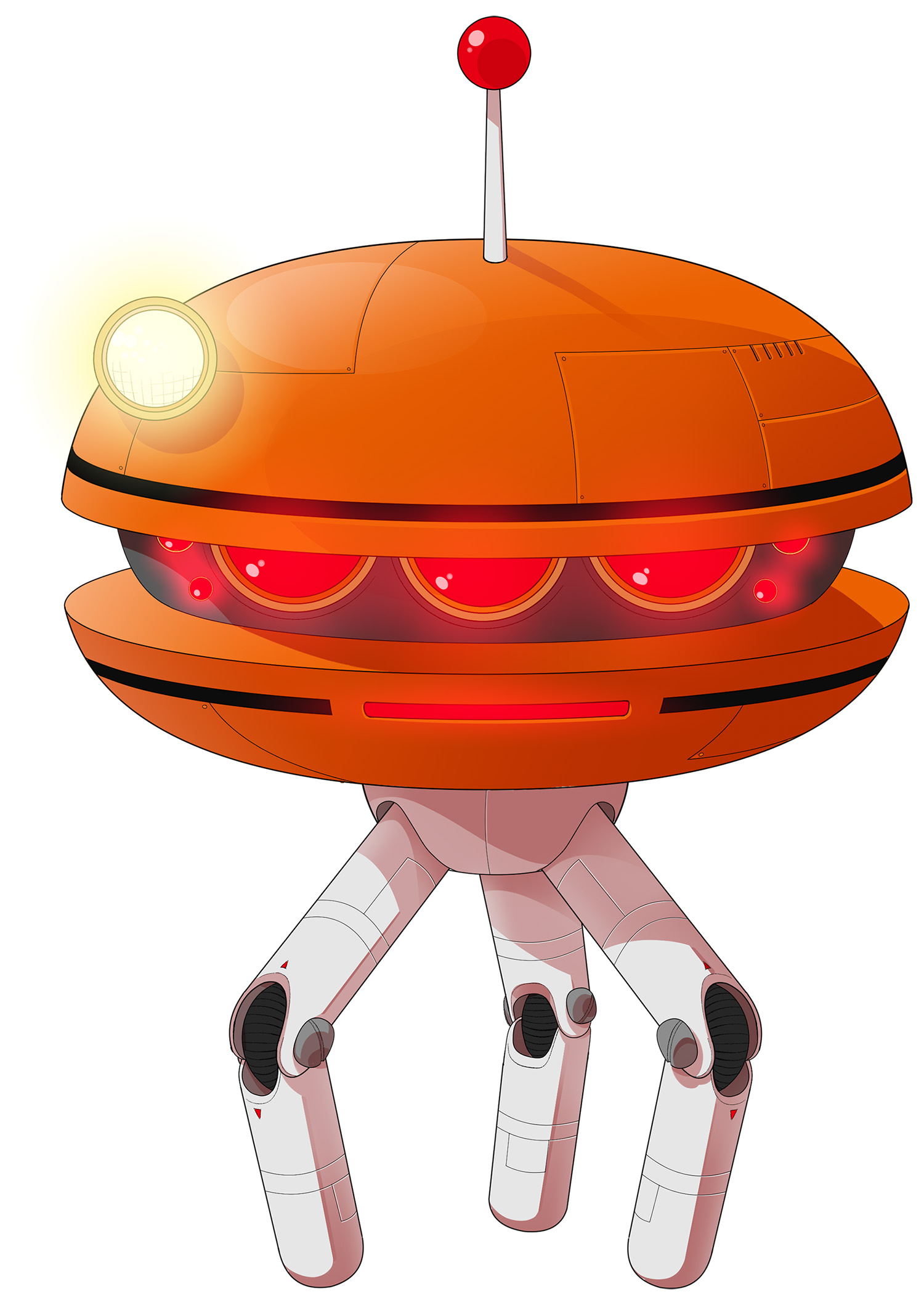 A new HERBY PrintPal™ is forthcoming to the Astrogun Shop, which also features PrintPals™ of the entire VAST character cast so far recently added to commemorate the relaunch of the new Astrogun.com Site at the end of March. PrintPals™ are printable and foldable mini paper figurines, and the proceeds of their sale go towards the budget for VAST’s production. If you would like to support Astrogun further as it continues to develop VAST, head over to the Shop and buy yourself some little VAST buddies from the game! 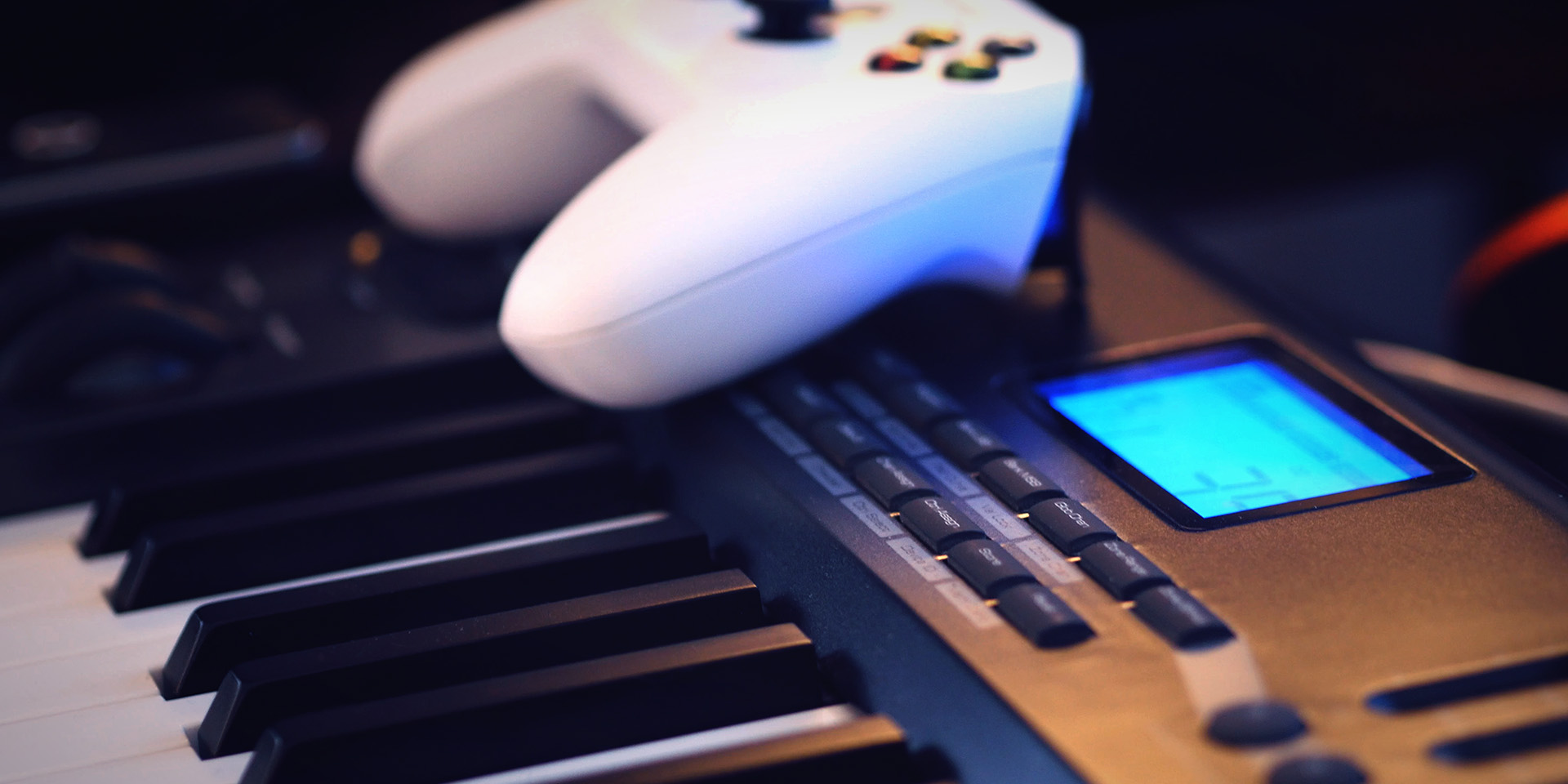 Xander has also begun work on the VAST Original Soundtrack (OST), which, if all goes well, will begin replacing licensed stock music currently in the game. He has written and produced the first original song, ‘Goodmorning Stars’, which is now in the Update 2 development build. This song and at least one other original track more should make it into Update 2. 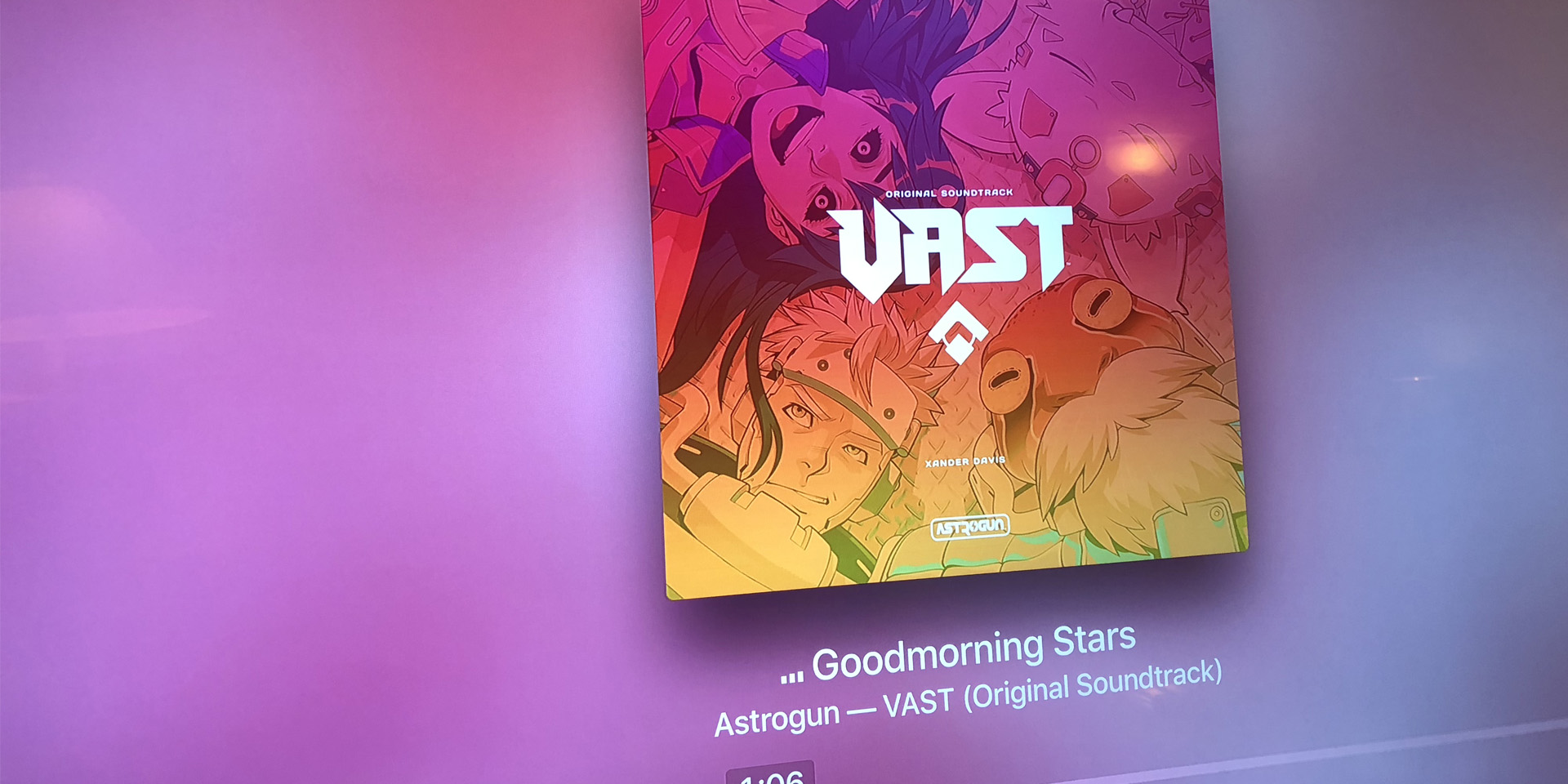 It is the goal to eventually release the VAST OST on the Astrogun Shop for purchase and download and to all major music distribution services, such as iTunes.

The Astrogun Labs are now buzzing as the schedule is very tightly packed over the next two weeks with very ambitious goals. The focus is currently on grayboxing out the rest of Episode 1 under the new Modo-centric pipeline, then adding back in all of the Interact objects, Vox events, Enemy Encounters, and Mission Objective conditions to achieve the rebuilt Episode’s first-playable from start to finish, completing Gameplay Vertical Slice (GVS) in Episode 1. Once that is completed, next week would then be focused on fleshing out the graybox with full, detailed and textured models to complete Art Vertical Slice (AVS) there. A final week is built-in to polish everything, fix any bugs, and ensure solid performance on Apple TV 4K.

Throughout this process during April towards May, Astrogun will be issuing regular behind-the-scenes updates and sneak peaks here through Astrogun Ultra, our premium online features magazine directly on www.astrogun.com/ultra.

Last but not least, the new Forums on Astrogun.com are now open!  Create an account and get to posting your thoughts on VAST!

Stay tuned and check back often!

And if you haven’t purchased VAST already, do so now! It will be your last chance to play the original soft launch version of Episode 1 and you’ll get the new version as well as all future Updates and Episodes to VAST for FREE! Visit the tvOS App Store on your Apple TV 4K and search for VAST to purchase our game, on limited-time sale for $9.99 right now! Be sure to also rate VAST five stars! It helps us in the Store and towards achieving placement on the Storefront!

Discuss in the Forum!